skip to main | skip to sidebar

Hi all and welcome to the Current Topics in Biomimetics blog! The aim of this blog is to offer insight as well as discuss the most recent issues, discoveries, and breakthroughs in the field of biomimetics. For those who aren't familiar, "biomimetics" is a subgroup of the field of "bionics". Bionics can be broadly defined as the application of biological methods and systems that are found in nature to the study and design of engineering systems and modern technology. Biomimetics deals specifically with the chemical reactions of these natural systems. These chemical reactions usually refer to reactions that, in nature, involve biological macromolecules, like enzymes or nucleic acids, whose chemistry can be replicated using smaller, more manageable molecules in vitro. In the following posts, we will attempt to report on the most recent publications in biomimetics, offering "Layman's terms" summaries, as well as our own thoughts, opinions, and insights into a fascinating field with a relatively short, but very interesting history. Enjoy!

We think of hospitals as places we go to get better when we are sick. Ideally, you enter the hospital with a problem, and you leave with a cure. Unfortunately, sometimes the opposite is true. Each year thousands of people die from healthcare-associated infections, or HAIs. Patients are admitted to the hospital to be treated for one thing and in the process sometimes pick up an infection such as methicillin-resistant Staphylococcus aureus (MRSA) or vancomycin-resistant enterococci (VRE). According to the Center for Disease control, approximately 1.7 million people contract HAIs in American hospitals every year.
Many of these infections can be prevented by following proper protocol. One of the most basic things doctors and nurses can do to protect their patients is wash their hands before and after contact with patients. However, while this seems like a simple solution, many doctors find it difficult to adhere strictly to the rules. In his book, Better: A Surgeon’s Notes on Performance (Metropolitan Books), Dr. Atul Gawande explains why doctors are so reluctant to follow proper hand washing procedure: “On morning rounds, our residents check in on twenty patients an hour….Even if you get the whole process down to a minute per patient, that’s still a third of staff time spent just washing hands. Such frequent hand washing can also irritate the skin, which can produce a dermatitis, which itself increases bacterial counts.” The introduction of alcohol-based sanitizing gels has helped the problem considerably, but infection rates are still staggeringly high. 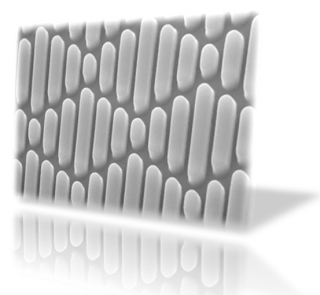 Another common method of HAI transmission is through contact with infected surfaces. Bacteria can live for hours on surfaces, turning hospital rooms into bacterial breeding grounds. Sharklet Technologies, Inc, a Florida-based life sciences company, has developed a solution to this problem: the Sharklet Hygienic Surface™. Used to cover surfaces that are often touched by doctors and patients, this product resists bacterial growth without using chemicals or toxins. The anti-bacterial properties come from the texture of the material. Inspired by the pattern of shark skin (which naturally resists growth of bacteria), the Sharklet Hygienic Surface is etched with microscopic diamond shapes. The surface has been shown to drastically reduce bacterial growth compared to smooth surfaces without contributing to antibiotic resistance.
The potential applications of this technology go far beyond the hospital room. Sharklet plans to design a catheter using the same pattern, hoping it will reduce the incidence of infections caused by catheters. It could also be used on surfaces in public restrooms, schools, restaurants, and anywhere else where bacterial growth could pose a health risk.
If this technology works and is implemented in hospitals around the country, it could have serious effects on our healthcare system. Each year billions of dollars are spent treating HAIs in millions of patients. Reducing the number of HAIs will save insurance companies money and allow hospitals to reallocate resources that were once used to treat these infections. Part of the solution to this problem must come from hospital personnel following procedures like hand washing, but making hospital surfaces resistant to bacterial growth would help considerably in the fight against healthcare-associated infections.
Posted by Kerry at 9:38 AM